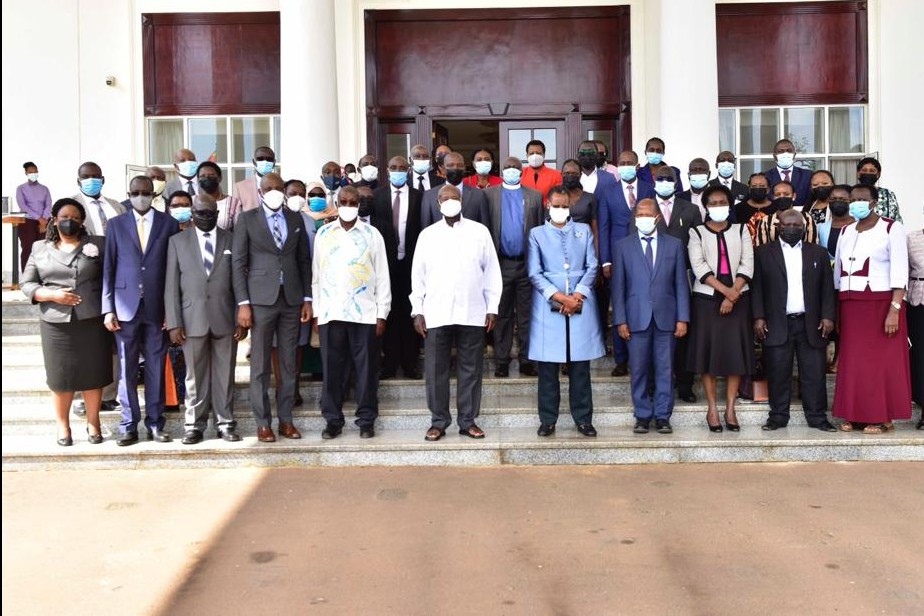 President Meets Education Review Commission
Advises on what to include in education white paper,
August 27th, 2022

President Yoweri Museveni has met the members of the Education  Policy Review Commission (EPRC) and suggested six areas to be  explored for inclusion in the report that will inform the formulation  of the new Government White Paper on Education and Sports  services in the country.

The President said the Commission should consider how the Pre - Capitalist and Pre- Colonial system was and its consequences that  led to the colonization of Africa, the production of raw materials in  the colonial and post-independence times and the need for change including manufacturing, expanding of the money economy as well  as service sectors, dealing with new colonial social science, the  attack of the African Identity and global exposure among others.

President Museveni further explained that Uganda’s education system must emphasize the issue of manufacturing and expanding  services and it must expose how Africa and other parts of the world can go from exporters of raw materials to building an integrated economy. He said there should be a good interpretation of the new colonial social science  through History and Political Science, while Economics and  Political Science should lay emphasis on regional integration to  solve the issue of markets for products and to organize ourselves  to be prosperous. He said the education system must also be used  to instill confidence in t Africans and for global exposure to  enable society metamorphosis.

President Museveni thanked the Education and Sports Minister,  Hon. Janet Kataha Museveni, for setting up what he termed as the  diagnostic group.

“I thank the Minister for setting up this diagnostic group because  that’s what the commission is about. It is about the diagnosis of  the education system in relation to the diagnosis of the problems  of society”, he said.

He noted that when the problems of society are known, it is easy  to come up with educational solutions for that society to prosper and  develop.

The President advised the 12-member Commission, which had  come to seek his guidance concerning the review process, to  discover how African societies in the pre-colonial era were  organised and how they solved their challenges when faced with  external forces.

The Education policy Review Commission, which commenced work  on 7th May, 2021, is investigating and inquiring into issues of  policy, planning, funding, access, implementation, management,  quality, institutional and staff capacity and legislation across all the education and sports sub sectors and will generate proposals  on how challenges affecting the education sector can be addressed.

The First Lady and Minister of Education and Sports Mrs. Janet  Museveni apologised to the Commission for the stressful  environment under which they have been working because of the  limited resources. She requested the Ministry of Finance to make  room for the EPRC in the restricted budget of Financial Year  2022/2023 to enable them start on the consultation meetings and  conclude the project by the new set timelines.

Due to a number of challenges largely relating to the COVID-19  disruptions and limited resources, the tenure of the Commission,  which was initially envisaged to complete the assignment by April  2022, was extended by another 12 months commencing June  2022.

Hon. Amanya Mushega, Chairperson EPRC, appreciated President  Museveni for his wise counsel and guidance on the future of  Uganda’s system of education, training and sports and said they  will take his recommendations into account as they embark on  seeking views of Ugandans nation-wide.

Amanya Mushega was grateful to Mrs Janet Museveni for her  support that has ensured sustained operations of the Commission.

The EPRC Deputy Chairperson and also Executive Director for  National Planning Authority, Dr. Joseph Muvawala, reported that  the Commission has registered some achievements since inception  in 2021. These include analysing the historical context for  education and sports related policies and legal reforms as well as  frameworks from national, regional, continental and global

perspectives, reviewing the implementation status of the 220  recommendations of the 1992 Government White Paper on  Education as approved by Cabinet and analysing a total of 105  memoranda so far from the public.

The Commission is preparing to undertake public hearings in all  regions of the country commencing with the Busoga region  because of the problematic education indicators. It will also  consult respective religious bodies and leaders. The Commission  re-affirmed its commitment to the successful completion of the  assignment.

The meeting was also attended by the Minister of State for Higher  Education Dr. J.C Muyingo and senior technical officers from the  Education and Sports Ministry led by the Permanent Secretary  Ketty Lamaro.

Members of Parliament to have a say in education reforms
Feb 15th, 2022
Gov't Review education reform system; former one to be phased out
Jan 31st, 2022
President Yoweri Museveni has met the members of the Education Policy Review Commission (EPRC) and suggested six areas to be explored for inclusion in the report that will inform the formulation of .the new Government White Paper on Education and Sport
Aug 30th, 2022
Experts ask govt to take over nursery education
Feb 18th, 2022
Press release No.001/01/22
Jan 31st, 2022
Retracing Uganda's Education Reforms, 35-Years After the Kajubi Commission
Feb 22nd, 2022
SCHEDULE FOR EPRC PUBLIC CONSULTATIONS
Oct 31st, 2022
SCHEDULE OF PUBLIC HEARINGS
Aug 30th, 2022